Information for Japanese language learners.
A couple of days ago I bought a brand-new edition of NHK pronunciation dictionary (2016) –
https://www.nhk-book.co.jp/detail/000000113452016.html
and right now I am preparing a major update for the Japanese kanji converter –http://easypronunciation.com/en/japanese-kanji-to-romaji-converter
First of all, it will become copy-paste friendly.
Since I wanted to display the pitch accent in Japanese words, it was pretty tricky. I tried several options to achieve this goal. I really like the overline style (there’s a line over the syllables pronounced with a higher pitch), but, unfortunately, Unicode fonts don’t allow to combine overline with kana.
For romaji there’s a solution – we can use upper and lowercase letters, but for kana we need something else. So I finally decided to use the same approach used in this new NHK dictionary (see the picture below). They use a backward slash for tone-drop and an overline at the end of a word if the following particle is pronounced with high pitch. I “improved” this solution by adding the forward slash to indicate a tone-raise.
娘 む／すめ＼
友達 と／もだち‾
I also hope to integrate Japanese-English dictionary, JLPT-level highlighting, add hand-writing worksheet generator and create a converter for Japanese subtitles. It may take about two weeks to finish all that. 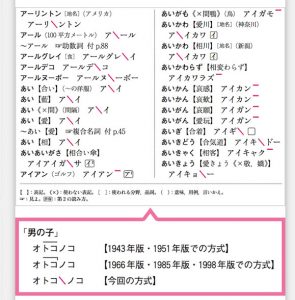